I had the opportunity to shoot some Pix and Flix at the Redbull 3style which made a stop in Pittsburgh. This qualifier was not held in Pittsburgh last year so that added to the importance of the event. The judges were DJ Selecta, @DJBonics, and last year's champ @FourColorZack. The contestants were (in order of appearance) @DJMidas, @DJ_Bamboo, @DJHankD, @DJPeteyC, @PeteButta. All had great sets that touched varying genres but the winner was @DJPeteyC who won in 2011 as well. Here are some Pix from the show. 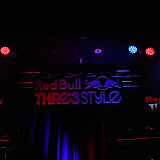